Tough Luxury got together in Sydney last weekend (flew in from around the country) & had a blow at Sound Level Studios Sydney They are looking at recording a couple of new tracks in the future, It would be good to see them back together playing, I'll keep you posted.

The video my of Without Warning may of aged a little, but the song still rocks....


Without Warning - from Music Video 1986

Check them out at www.myspace.com/toughluxury2010
Posted by skids at 6:22 PM 6 comments: 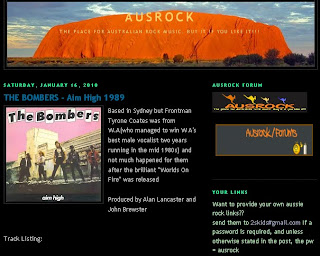 G'day, this blog is just a shadow of the original Ausrock blog which was deleted by blogger on Australia Day 2010 (26th Jan). If you just finding this blog today, you have missed a whole lot of fun. I have a good idea who got Ausrock removed, but i am not a vindictive person, they think I am damaging their income, i am just broadening their fan base. But hey enough of that, they can't permanently stop music being sampled/shared, you can find a lot of Aussie music at the top of my blog roll, so enjoy, I am (basically) outta here, with maybe the occasional future post - hooroo!
Posted by skids at 5:59 PM 14 comments: 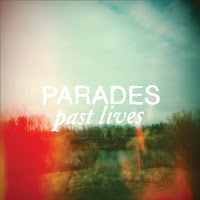 Parades is a new indie rock band from Sydney

Album will be out through Dot Dash in April and they're touring with The Seabellies, throughout March-April.

More on the band here: myspace.com/parades


They have a new single called Past Lives:
Past Lives
Posted by skids at 10:43 PM 1 comment:

THE CORPS - Live at the metro

"the Corps" Live at the metro

Live Corps
Posted by skids at 9:06 PM No comments:

Sydney based 5 piece band, The Corps, play original hardrock & roll crossed with punk. From the influences of bands like Motorhead, Rose Tattoo, and Condemned 84 comes an Oi! sound, yet heavier and laced with slide-guitar. It is in an Aussie tradition of no-bullshit rock & roll that they have created a growing cult following both locally & abroad.
http://www.myspace.com/thecorps
Alex : vocals
Scott: Guitar
Aj: Guitar
Will: Bass
Jordan: Drums
1. Sold Out2. Graveside3. Sunny Days4. Over The Top5. A Girl Like That6. Into Battle7. Bad Taste8. Shattered Pride9. Get A Job10. Nail It Shut11. Built To Last12. Itchin' For Evil
Thanks to Scott
Nail It Shut
Posted by skids at 12:55 PM No comments: 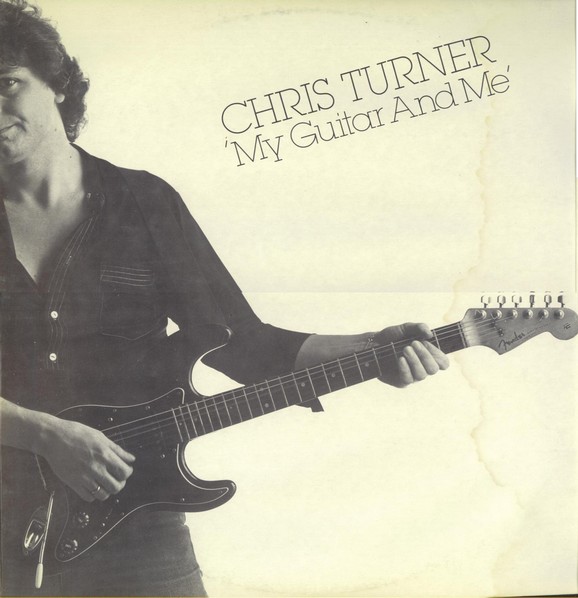 Recorded in Sydney in mid 1980 this is the first solo album by Chris Turner, a guitarist formerly in ROSE TATTOO and BUFFALO, also features fellow Rose Tattoo members, the late Pete Wells, Dallas Royal and Geordie Leach. Real rocking guitar playing from Chris Turner as well as great slide guitar from Peter Wells, not a well known album, but a classic none the less, if you like guitar, you'll like this.

Chris Turner
Posted by skids at 9:30 AM No comments: 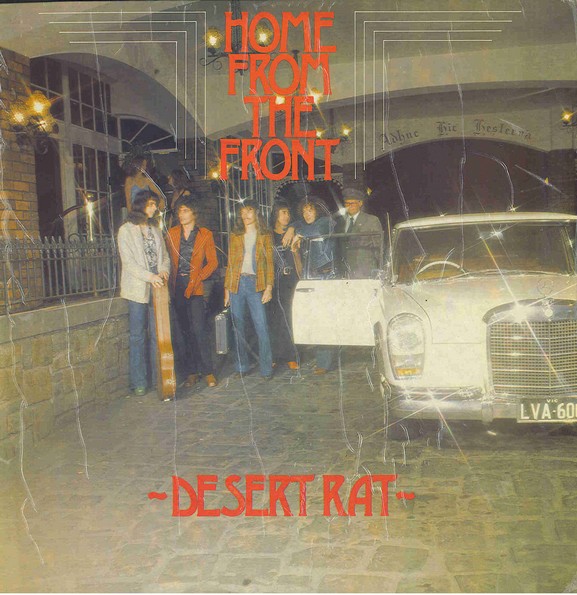 Melbourne pub band that worked heavily around the traps. Recorded one album that was engineered and produced by Gil Matthews from Billy Thorpe and The Aztecs 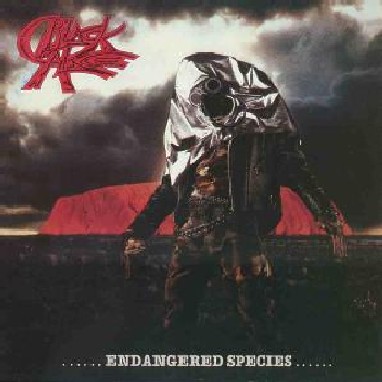 Black Alice was a Perth heavy metal band from the early 1980s that sounded like Judas Priest.

The album was financed by West Coast Records, Perth, of which was managed by Gary Keady who at the time had an output deal with Powderworks Records in Sydney and Powderworks were an independent distributed by RCA. RCA sponsored their recording session in Singapore and released the album internationally before it was made available in Australia.

Powderworks never released the album, only the single 'In the Hall of the Ancient Kings'. The album was only ever released in Europe with a deal done by Gary Keady with John Glover of 'Street Tunes', who owned the library of Paul Kossoff.

Black Alice were badly done by. The album Endangered Species was excellent and totally original, a little ahead of it's time for Australia. Even Kerrang voted it in 1984 as one of most original albums to come out of Australia. Like a lot of Australian albums at the time 'Endangered Species' got caught up in the independent 'hassle'. Because the album was made without major record company support and because the band was from Perth, there was little chance of getting a deal direct with a major and thus no hope of gaining promotion to promote the album and the band. It was not a particular success and Black Alice effectively ceased to be shortly afterward.

In 1988 Page and Hartley revived the band with help from Cichon and Johnston from Rose Tattoo to provide the soundtrack for the film Sons of Steel in which Hartley starred.

Page formed Trilogy in 1984 with two former members of Saracen and later did extensive session work including two Angus McDeth albums and in the mid-90s formed a cover band called Black and Blue that evolved into Black Steel.

a colonial jig in the song 'Man of Metal' (about Ned Kelly - title forerunner to the later movie title 'Sons of Steel' ). This song was left off the album along with 'Hellhouse' but later added to the 'No Warning' release in Europe only

thanks to Deutros
Black Alice
Posted by skids at 5:35 AM 1 comment: 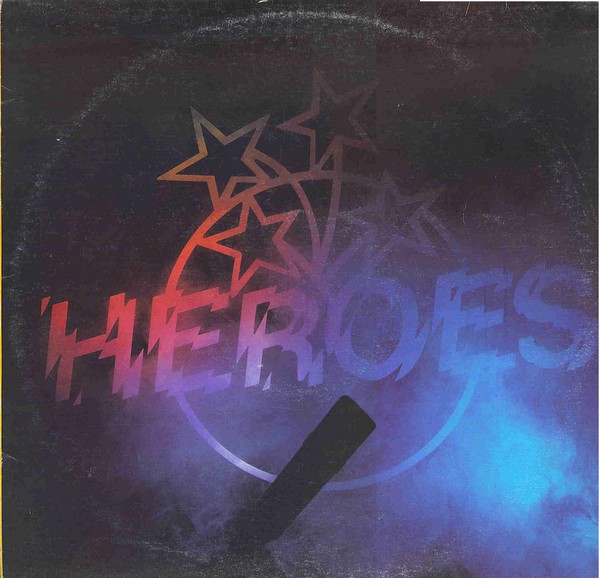 Heroes began in October 1977 when ex-Rabbit members Jim Porteus, Mark Tinson & Phil Screen recruited vocalist Peter De Jong. Basing themselves in Newcastle emphasising pub rock which gained them a good following. In 1980 the band signed to Alberts/EMI and recorded this, their self titled album which reached #1.

Heroes other claim to fame is that they were the last band to play at Newcastle's Star Hotel, the controversial closure of which sparked off street violence and rioting that night. Their choice of song, The Star and the Slaughter, led later to singer Peter de Jong being charged with the incitement to riot. One verse runs: "I want action, And I want fighting in the streets. Gonna take this town by storm, Gonna burn the buildings down ... " 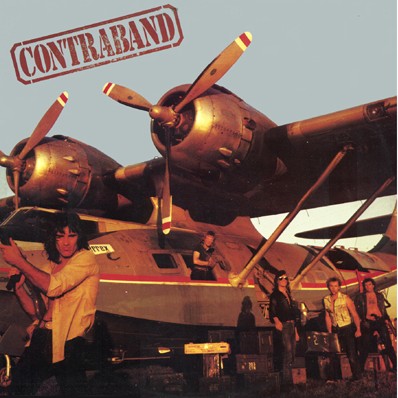 Contraband were a Sydney hard rock band, previously known as Finch. Finch formed in stillwater in 1973 and, after signing a deal in the US with CBS's subsidiary label, Portrait Records, the name was changed again to Contraband due to dutch band called Finch.The band broke up in 1979. Nothing like 70's aussie rock, former band members include Mark Evans (AC/DC) and Bob Spencer (Skyhooks, The Angels).

Deutros
Contraband
Posted by skids at 1:33 AM 3 comments: